“Let us not seek the Republican answer or the Democratic answer, but the right answer. Let us not seek to fix the blame for the past. Let us accept our own responsibility for the future.”

We must have a leader proven in their ability to withstand political pressure, willing to openly hold to their convictions, no matter what the cost. This will be Sam’s last and most important run for elected office. Both her campaign and administration if elected will hold to the highest possible standard of Best Political Practice: Transparency, Campaign Finance Limits, Mayoral Term Limits, Accountability and Responsiveness, Voter Participation and Reflective Governance.Read More.

Sam’s ability to stand up to political pressure is proven. One example: when CNN reported that the 2004 Presidential election results in our region – which Sam was responsible for as Regional Field Director for largest voter mobilization effort in our nation’s history – those results were hard won. Discovering from PA’s Secretary of State with colleagues who had designated her their spokeswoman – that Lehigh County was the only in the state not to use the extra computers, staff and funds made available to process the wave of new voter registrations anticipated in that election – and that his offices had no means to force Lehigh County’s Board of Elections to process the hundreds upon hundreds of voter registrations we had been submitting to them – Sam took action. Assembling regional media and leaders in front of the Board of Elections doors – the goal was to have a press conference to let the public know that potential new voters were being prevented voting. Asked by county leadership what needed to happen to prevent this press conference from occurring – her request was simple – register these new voters. To Lehigh County leadership’s credit – that is exactly what they did – and our region ended up being the top performing in the nation as a result.

Faith must be restored in City Hall and its Mayor’s office to keep Allentown’s redevelopment momentum moving forward. Sam’s campaign is dedicated to restoring voter, resident and investor confidence while also reversing the alarming decease in Allentown voter participation over the past decade.

Sam’s goal if elected Mayor would be for our city to have one of the highest levels of citizen engagement, voter participation and reflective governance in the nation.

This will be her last run for elected office and She looks forward to applying my almost two decades of political experience – as a change making national political CEO, record setting regional field director, standard busting U.S. Congressional and City of Allentown mayoral candidate and ongoing political commentator on regional and national media – to help restore public confidence in City Hall.

Sam stands for financial transparency. Their campaign has posted all past City Of Allentown election financial reports below. Anyone can easily see who has and how much they have invested in any of my campaigns: Mayor of Allentown 2001, 2005 and 2017. In the near future once Sam’s campaign has obtained it from the FEC they will also post financial reports from Sam’s run for U.S. Congress in 2008. Sam and her husband are prepared to release the last three years of our federal tax returns. Sam, her staff and volunteers challenge the slate of 2017 mayoral candidates to join us in sharing this information with the public.  Read More.

Sam believes in political openness. All members of and consultants to her campaign are featured on their Campaign Team. Sam’s campaign is made up of long time Allentown residents passionate about the city’s future, not political operatives. Their national consultants have impeccable and long-standing reputations in their areas of expertise. Sam’s campaign Chair and Treasurer have the highest possible integrity and reputations.Although as Allentown’s former Democratic City Chair Sam created a Political Action Committee to successfully elect Democrat Pawlowski’s against his opponent Republican Heydt, she has come to have reservations about this well-oiled political tool used on a local level. Sam became particularly concerned when Pawlowski and his right hand man Fleck created such a committee to undermine elected officials that had the courage to oppose them – notably Allentown School Board Director Ce-Ce Gerlach and retiring Allentown City Councilwoman Jeanette Eichenwald – especially when sitting state elected officials agreed to also invest in this committee. Sam pledges to not engage in this brand of political power broking either as a candidate or as Allentown’s future Mayor.

Sam believes in political authenticity. All blog and social media posts, emails, website content, speeches will all be written by her as a candidate for Mayor of Allentown 2017, not by staff or consultants.

Sam will work with City Council and other stakeholders to institute campaign finance regulation if elected Mayor of Allentown. In her race for U.S. Congress in 2008 her campaign strictly adhered to federal campaign finance rules1 intended, among other goals, to reduce undue influence by donors. Many states and municipalities have instituted similar regulations – proven to have an unintended positive effect: boosting representative governance, increasing the number of women and minorities that run for elected office.

Sam stands for Mayoral term limits. Term limits will help prevent mayors from losing sight of what their primary job is – to serve the taxpayers that elect them – not unduly focus on the accumulation of political power or the creation of a springboard for future runs for higher office. Read More.

Sam will work with City Council and other stakeholders to institute mayoral term limits if elected Mayor of Allentown. If your average Fortune 500 CEO serves 4.9 years managing $25 billion dollars, she contends 8 years is time enough for the CEO of Allentown, its Mayor, to accomplish what they were elected to achieve with a budget of $97 million dollars. 51% of major U.S. cities. have term limits that follow the two four-year term maximum that U.S. Presidents serve2. As CEOs of their communities, mayors like U.S. Presidents are responsible for setting vision, then making sure the resources are available and the culture is built to achieve that vision while also making good decisions when overseeing and delivering overall performance, and then move on to make room for new vision and leadership.Though Sam is against legislative term limits – it can take decades of toiling for essential legislation to be passed – she believes deeply in executive term limits. Her goal whenever assuming leadership has been to do her best to execute impeccably against her vision for the organization, work to undo the inevitable unintended mistakes of any predecessors and build systems that will assist over the long haul when another leader takes my place – bringing fresh vision and skill sets to the cause. Regular change in executive leadership is healthy for organizations, nations and cities. It will be healthy for Allentown.

Sam stands for accountability and responsiveness. In her over three decades in business, civic and more recently political, non-profit leadership – the most valuable lesson she has been provided is that mistakes are part of decision making and risk taking. Accountability and responsiveness regarding those mistakes is essential even when painful. As such, this website includes a FAQs page that addresses specific decisions of concern over the course of her thirty years of ground breaking leadership. They look forward to adding to this page as other questions arise on the campaign trail from concerned citizens.

Without as many citizens voting and participating we will once again have the lack of oversight of our elected officials characteristic of the current administration. Sam will use her almost two decades of political leadership experience to ensure as many citizens of voting age are registered as possible, and as many voters participate in all elections as possible – reversing the disastrous decline of the past decade.Read More.

In 2001, when Sam was recruited by both Republican and Democratic leaders to run for Mayor of Allentown, she lost by 46 votes to 20 year political incumbent Roy Afflerbach in the primary. In that general election over 16,981 voters participated. Fast forward to 2013 with only 9,447 citizens casting votes in that general election, a 44% decline in voter participation over the three terms of the current administration. With only 8% of Allentown’s citizens selecting their Mayor – how can proper accountability of elected officials possibly be maximized? Sam’s goal as Allentown’s next mayor would be for our city to be a national example of voter and citizen engagement – at least meeting the U.S.’s globally low voter participation rate of 53.7%. Sam is uniquely qualified to do so. As a former Republican she was honored to commute to DC for five years as national CEO of the non-partisan historic political organization Women’s Campaign Fund and She Should Run. As the former Chair of the Allentown City Democratic Committee Sam engineered a dramatic increase in voter participation that led to the first ever Democratic Party sweep of both city and county offices in 2006. As the former Regional Field Director for America Coming Together in 2004, Sam led PA-15 to be the nation’s highest performing swing region in that presidential general election. Citizen and voter participation are an essential component of the future that waits for our historic city.

Sam pledges to encourage as many Mayoral candidates and Allentown voters as possible to participate in the 2017 Mayor’s Race. Though she will focus on asking Allentown Democrats to vote for Sam in the May 16, 2017 primary and for voters on both sides of the aisle choose me as their next Mayor November 11, 2017 – Sam welcomes all potential opponents: a deep bench of potential candidates will increase voter participation and provide a more spirited, healthy campaign.

Finally, all research shows with elected officials that reflect who they serve – reflective governance, better outcomes for citizens. We need qualified elected officials at all levels that reflect Allentown’s age, ethnicity, and income. Sam will continue to mentor, financially support and assist candidates who represent Allentown’s standing as not only the third largest and fastest growing city in PA, but also home to one of the fastest growing Latino populations in the state and nation – candidates like Tatiana Tooley, Cynthia Mota and Ce Ce Gerlach.

With confidence restored in City Hall and its Mayor’s office by the use of Best Political Practice – Sam’s campaign and future administration will keep Allentown’s redevelopment momentum moving forward. 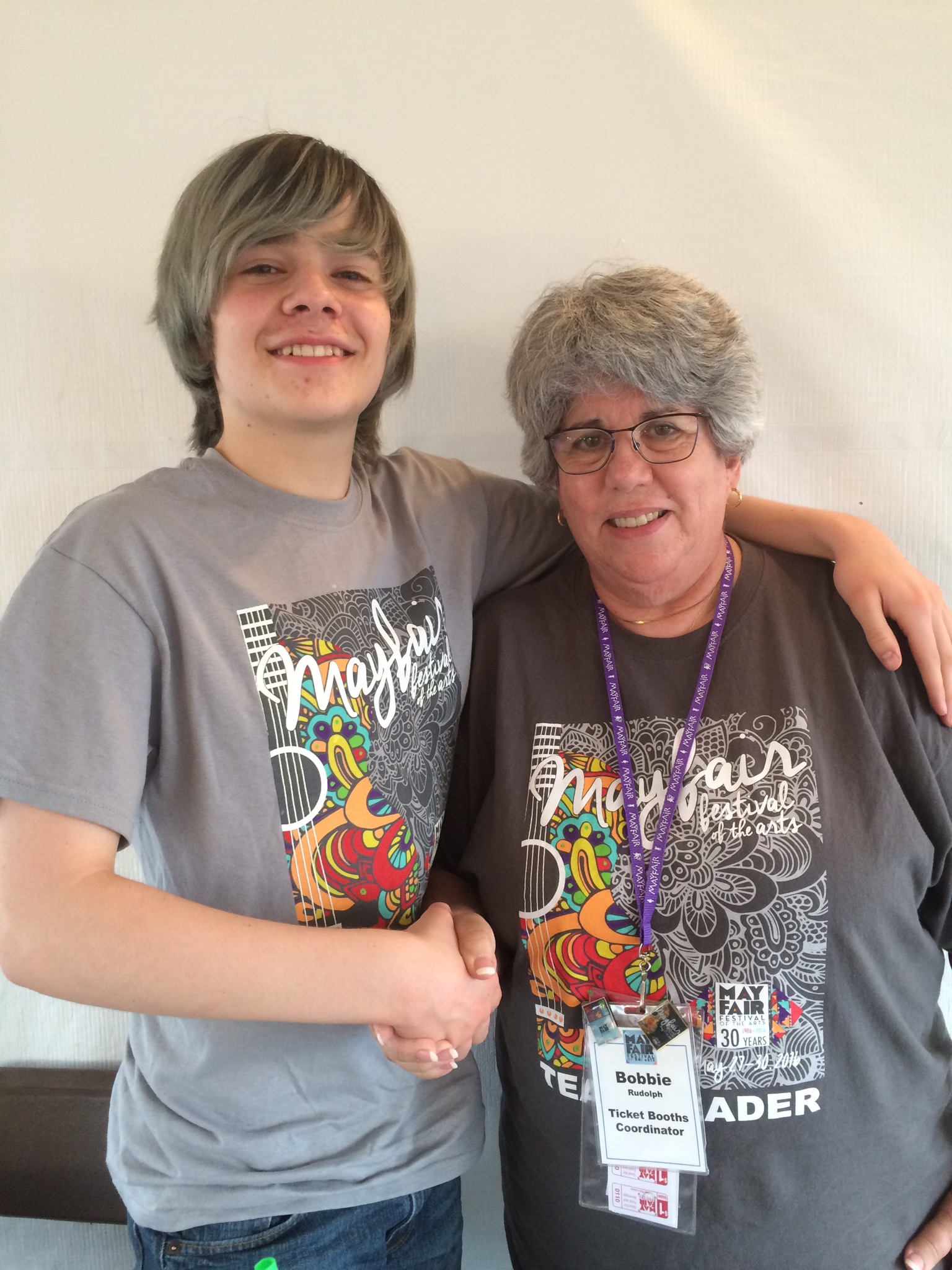 “A volunteer for each of Mayfair's 30 years and a supervisor/team leader for the past 23 year I've worked with all it's executive directors. Not only was Sam Bennett its most successful Executive Director- she was the best ever at managing Mayfair's most important resource - its volunteers.”
— Bobbie Rudolph - 20 year Volunteer Supervisor Mayfair Festival of the Arts